2 Tickets Per Hour is a QUOTA

Next
2 Tickets Per Hour is a QUOTA 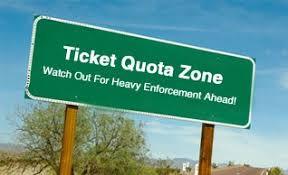 According to CBS4 News, Florida Highway Patrol troopers have been told by a top official that they have to write more speeding tickets. In an internal memo published by the Tampa Bay Times, FHP Major Mark Welch told troopers under his command in an email that “the patrol wants to see two citations each hour” during their shift. He added that the directive was not a quota.

Welch urged his troopers to take part in the Statewide Overtime Action Response (SOAR) initiative, where they can make extra money by working the road. He also noted the five percent pay raise the Legislature and Gov. Rick Scott recently gave troopers, noting that it “has also increased your overtime rate.”

Quotas for law enforcement, under Florida law, are illegal – something Florida Department of Highway Safety and Motor Vehicles Executive Dir. Terry Rhodes addressed in a notice to FHP. “Let me be very clear: Quotas have no place within the Florida Highway Patrol. Getting in the black and tan to patrol the roadways is expected. Helping to educate and assist motorists is expected. Protecting lives is expected. Quotas are not part of our mission operationally or legally.”

FHP quickly addressed the memo Thursday saying the memo addressed a volunteer overtime program meant to target aggressive drivers. They claimed the commander was looking to motivate troopers and should have chosen his words more carefully.

Still the question remains: is this a quota?
“It sounds like it is a quota,” attorney David Weinstein told CBS4. “The major was specific saying this is not a quota, it’s a goal. But we have an old saying in court when we are at trial. If it walks like a duck, talks like a duck and it acts like a duck, then it must be a duck.”

If it is a quota, Weinstein said the fallout could be big. “What it means is it presents a way for us to challenge a ticket we receive if it’s part of a quota,” he said.

In other words, if you can prove it to a judge, quota tickets can be tossed out. FHP maintained the northern Florida troopers were not incentivized or disciplined for writing more or less tickets.

In Miami though, they may have been. Another internal email reveals that Miami-Dade troopers were assigned ticket goals. If met, they were given a weekend incentive in which they could pick which two days of the week they wanted off. FHP sent CBS4 a statement that read, in part:
“The members were not monetarily rewarded nor given paid time off for their efforts, but rather given a more accommodating schedule to enjoy time off with family. This practice in no way reduced the amount of troopers patrolling the state’s roadways or impacted public safety.”

However, someone complained to headquarters about the program, which led to a review. FHP said “it was determined that, though this was not a policy violation, it was not permitted to continue. An order was given to immediately cease the program.”

Over the past few years tickets by troopers have been on the decline. It is unclear if the recent goal programs have changed that. FHP maintains these goal programs are about safety, not about writing more tickets and making money.

“The FHP’s top priority is saving lives on Florida’s roadways. To achieve this, FHP conducts education and enforcement efforts aimed at curbing dangerous driving behavior. The FHP absolutely does not establish quotas for its members, however, an interaction with an FHP Trooper, whether it is through a warning or citation, can undoubtedly save countless lives each year,” said FHP Lt. Colonel Michael Thomas in a statement.